Mariellen Ward is a professional travel writer based in Toronto and Delhi. Breathedreamgo.com, her award-winning travel blog about "meaningful adventure travel," is inspired by her extensive travels in India. She writes for many print and online sites, co-founded the Toronto Travel Massive, Delhi Travel Massive and founded the WeGoSolo online community for female solo travellers. Though Canadian by birth, Mariellen considers India to be her "soul culture" and has spent many years immersing herself in the culture. You can also find Mariellen on Facebook, Twitter, and Instagram.

Mariellen Ward, editor and publisher of Breathedreamgo, tells the story of her pilgrimage to Darjeeling’s tea gardens and lessons learned along the way.

Chai truly is the drink that unites India, and acts almost like social grease. Chai is more than a beverage; in fact, it is a ritual, enacted millions of times each day across the breadth of India to bring people together, to create bonds among the diversity, friends among the masses.

I drink chai throughout India, on trains, in homestays, at ashrams, in the market and with friends. I like it thick and sweet, in the traditional style, and I also search out the best quality teas, from Darjeeling and Assam. 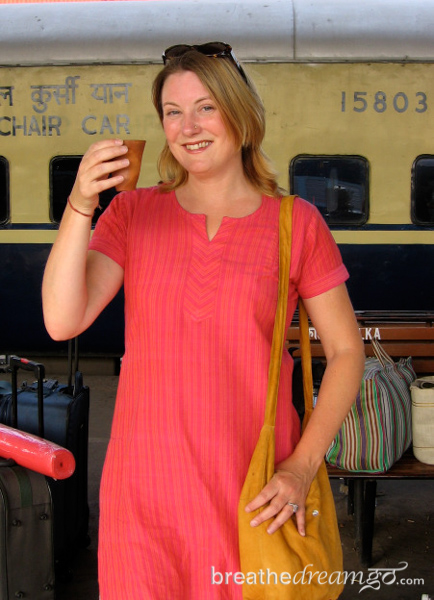 Once I made a pilgrimage to Darjeeling and walked happily among the tea gardens. I wanted to find out if tea plants impart the same refreshing feeling as a cup of tea. And they do. This was a revelation! I wrote about it — and meeting Rajah Banerjee, the King of tea — in my blog post “Tea and sympathy,” originally posted on my blog.

TEA HAS A MAGICAL effect. It instantly refreshes and soothes the soul. But, for me, it also carries an aroma of nostalgia — as if the past is steeped into the leaves, along with hope and optimism.

Is it the nature of tea leaves to impart this effect, I wondered, before I made my pilgrimage to Darjeeling? Or did I feel this way about tea because of tender memories of tea parties with my Nana when I was a child?

This is what I travelled to Darjeeling to find out. I wanted to ascend to the heights of one of the world’s great tea growing regions, the home of the “champagne of teas,” and to experience the spirit of tea first hand.

Tea with the Thunderbolt Rajah

I stand in anticipation before the row of white porcelain teacups. The King of Tea, Swaraj Kumar “Rajah” Banerjee – known in Darjeeling as the Thunderbolt Rajah – flourishes his arms as he speaks excitedly about silver tips, muscatel flavours, the movements of clouds and the secrets of growing the world’s most expensive tea. His quiet assistant, in an apron emblazoned with the green Makaibari logo, deftly pours a different tea into each cup, the colours ranging from pale straw to rich honey.

I am sampling some of the world’s finest teas – organically grown on the Makaibari tea estate in Darjeeling, land of the thunderbolt. Makaibari is the oldest tea estate in Darjeeling, the first to go organic and one of the most successful: they supply tea to the Tazo company, sold at Starbucks. As I hold the earthy, fragrant flavours in my mouth, I gaze out the window on the rolling green tea gardens, lit up by the late afternoon sun. I suddenly realize I am having the perfect Darjeeling moment: stimulating, refreshing and deeply satisfying. 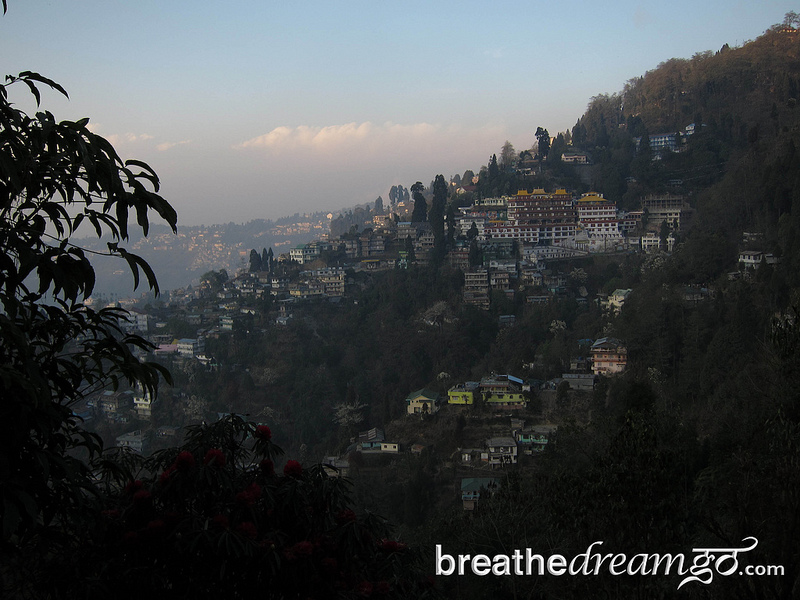 The scent of far-off lands

Though my grandmother, Nana, loved to bake and tell stories, there her resemblance to story-book grandmothers ends — for Nana was very elegant. She smoked with a tortoise shell holder, had long painted nails, wore Wallis Simpson-inspired A-line taupe dresses and drove a matching taupe-coloured car.

From the time I was about three years old, Nana and I had tea parties together. At first, she gave me a plastic tea set, and I remember drinking from the tiny cups. When I was about six or seven, she gave me a white-and-gold china tea set fit for a princess.

Nana lived with us when I was growing up. She had a way of making occasions special, and our tea parties are among my earliest childhood memories. We had tea together, just the two of us, in Nana’s small apartment, built onto the side of our house. She wore full make-up, ropes of thick costume jewelry around her neck and an enormous emerald-coloured glass ring, and served the tea on an antique table, on her last remaining Persian carpet. The tea was always accompanied by bread, honeybutter and stories.

Nana’s stories and the scent of tea – grown and harvested in a far-off land of mist-covered hills – transported me. Those tea parties were the first of many steps that eventually took me to India, and then, after an arduous journey from Delhi that included a bone rattling, four-hour drive up a steep road and into the clouds, to Darjeeling.

The story of tea

Darjeeling, the town, sidles precariously up a steep mountain face in remote northeast India. The region of Darjeeling spreads out for many miles in all directions beneath the town, and encompasses many tea plantations: tea cannot grow at the altitude of the town, it must be 1,000 metres lower.

The history of how tea came to India and the west is fraught with intrigue and adventure.  It all starts in China in the 18th century when British traders began bringing crates of it back to England. The English acquired a taste for tea and soon demand far outstripped supply, and Britain began running a trade deficit with China.

British adventurers came up with the idea of growing tea on Indian soil, and began importing tea bushes from China into the regions of northeast India that had the most suitable growing conditions – namely, the hilly regions of Assam and Darjeeling. In fact, they discovered that tea grew indigenously in this region, and experimented with both the imported and natural varieties to achieve the best flavours and yields. As the British Raj flourished in India, so too did the tea trade. 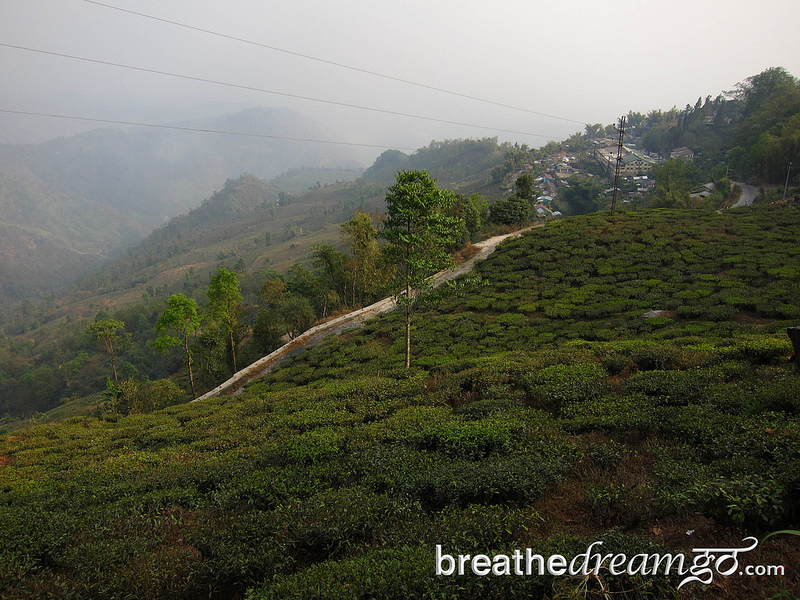 During these wild east frontier days, Rajah Banerjee’s great-grandfather, G.C. Banerjee, escaped the confines of Calcutta to seek his fortune in the hills. He prospered at a very young age – by 20 he was already wealthy – and a friend bequeathed his estate to him. It was on this estate, Makaibari (which means corn field) that Darjeeling first’s tea plantation came into being, under the leadership of G.C.

Three generations later, when Rajah Banerjee was a graduate in England, intent on a future there, he went home to Darjeeling for a visit. While riding his horse among the tea plantations and forests of his ancestral home, he fell, and as he thudded to the ground had a life-altering, thunderbolt of an experience: “Beyond time and space, I saw a brilliant band of white light connecting me to the trees around me. The woods sang out melancholically in an incredible concerto, ‘Save us! Save us!’”

That was on August 21, 1970, and from that day to this, the “Thunderbolt Rajah” has put his heart and soul into saving the vanishing woodlands, and protecting and nurturing the people and culture of his Himalayan region.

I dutifully tried each of the teas that Rajah Banerjee laid out before me, and began to appreciate the subtle and distinct differences between them. “What champagne is to wine, Darjeeling is to tea,” he said. From light and golden, to rich and flowery, Darjeeling tea is delicate and delicious. The differences in colour and flavour are the result of many factors, such as the season it is harvested.

Over the course of an afternoon, Rajah explained the art and science of Darjeeling tea to me. “This is a magical, mystical land,” he said, “and the tea is symptomatic.” As a long-time student of Rudolf Steiner, the founder of biodynamic agriculture (precursor to organic farming), Rajah has been a tireless pioneer and advocate of human, cultural and environmental sustainability in Darjeeling. When he converted Makaibari in 1980, and had it certified in 1988, it became the first organic tea plantation in Darjeeling. Now, about 35% of the gardens are organic.

“Makaibari is an oasis,” he said. “We are not seeking to be a leader, but an inspiration. We have the tools here at Makaibari for a much better world, a sustainable world.”

For Rajah Banerjee, the end result is the flavour of the various teas Makaibari produces, such as their top-of-the-line Silver Tips Imperial, apparently the most expensive tea in the world — and my favourite of the ones I tasted (I bought a bag of it at the Makaibari store). But the process is equally important and it includes a long list of innovations in agriculture and in creating a sustainable human environment that protects the culture and the people who live and work on the estate.