Jenny Kostecki-Shaw and Patrick Shaw (a.k.a. The Masala Chai Wallah) share a love for good chai, Indian culture and each other. Jenny is a freelance illustrator and national award-winning children’s book author and illustrator. Patrick teaches Ayurveda, Ayurvedic cooking and Ayurvedic herbology at the University of New Mexico in Taos and has been making homemade masala chai for over 20 years. They recently published an illustrated book, Chai Pilgrimage, which you can order at chaipilgrimage.com.

Inspired by their love of chai, Patrick Shaw and Jenny Kostecki-Shaw embarked on a pilgrimage around North India to collect recipes, learn about ayurvedic traditions, and find out the secret behind what makes a good cup of chai. They recently published their story in a beautifully illustrated book, Chai Pilgrimage. Their journey led them to Pappu’s chai stall in the sacred city of Varanasi.

Amid the traffic of rickshaws, motor scooters, market-goers and a small herd of water buffalo being led down the road, we discovered the popular Pappu chai stall. Early in the day, it is a gathering place for elder intellectual types who read the newspaper, debate political issues and get their morning dose. After hours, it becomes a quiet hangout for bhang (edible marijuana) users. Locals told us the chai stand had been there for 80 or 100 years.

We sat down outside on a low concrete wall next to Ashu, a regular customer and owner of Shiva Rooftop Restaurant down the street. Over the noise of horns and bicycle bells, we asked him what made Pappu chai so special. “Because it is hygienic,” he told us. “They clean the gilaas [Hindi for glass] every time by the hot water. It is unique way. You will never see like this one.” It was true. In all our time in India, we had never witnessed soap or hot water being used to clean glasses or any chai-making implement. We observed as a young boy first rinsed the glasses in reused cold water like other chai stalls, then gave them a thorough cleansing with hot water that was boiled on an open coal fire. The health of chai drinkers across India would surely benefit from this trademark disinfecting procedure. 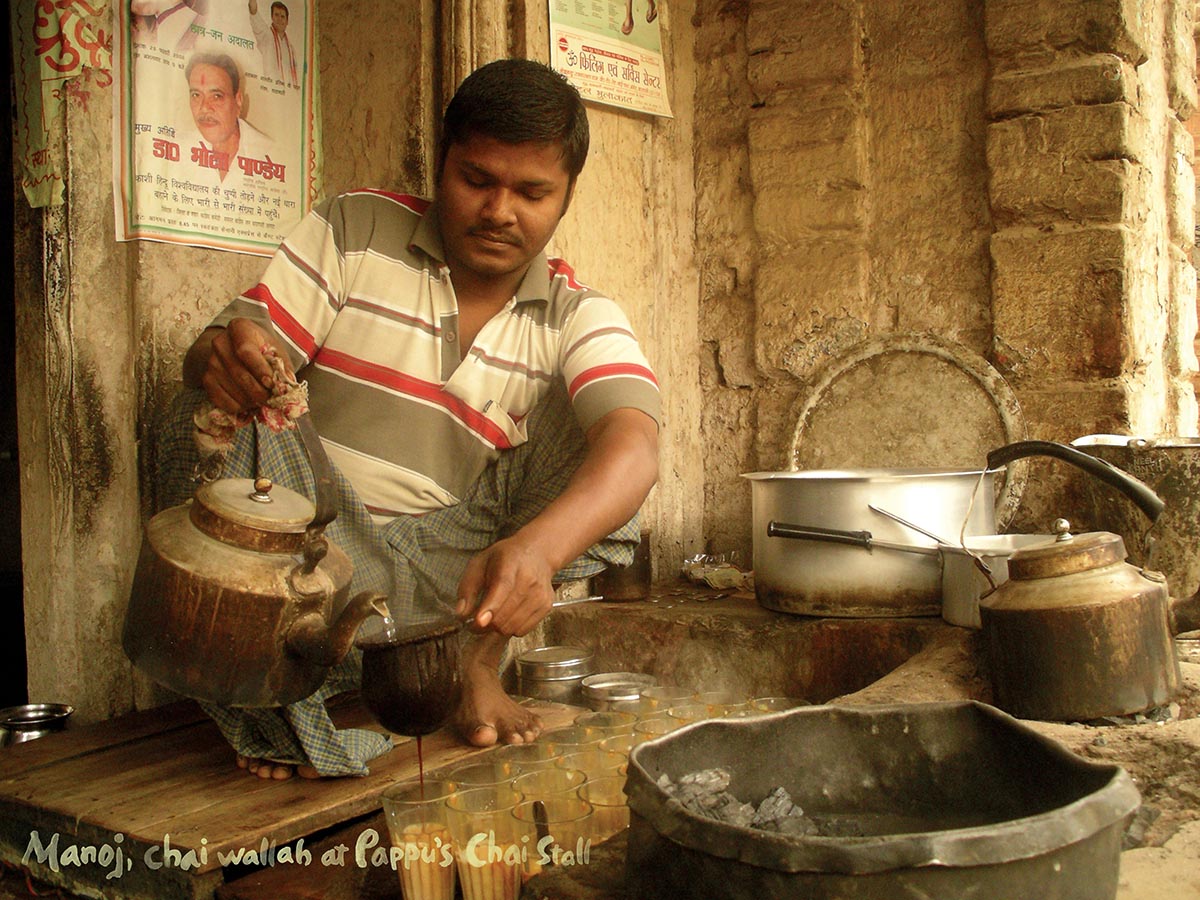 Manoj operated his chai stall with great precision and speed. A third-generation chai wallah, he employed an unconventional chai-making technique handed down from his grandfather. Instead of making a pot of chai, each glass was prepared individually in assembly-line fashion. First, he carefully calculated the number of glasses to be made by a count of seated customers, expected regulars and estimated drop-ins. The glasses were grouped together into three parallel rows, and a spoonful of sugar was put in the bottom of each glass. Manoj ladled hot milk on top of the sugar, then measured the tea by hand into a tea “sock,” with tea carefully added or taken out to suit the number of glasses being made. Boiling water was then slowly poured over the tea until it was fully saturated and the tea water started to come through. When the flowing tea had a rich, dark-brown color, it was quickly passed over the glasses with one hand while hot water was poured from the kettle with the other hand. He first moved the filtered tea lengthwise over the line of glasses, then back and forth. A little more tea was added, then again across the glasses. Unlike other stalls, the chai at Pappu’s is made from “new tea every time — not boiling again and again,” Ashu told us.

We learned that Manoj prepares about 700-800 glasses of chai per day from five in the morning until ten at night. We asked Ashu, “How much per glass?”

He answered, “two rupees,” and before I could do the dollar conversion of multiply, take off the zero and divide by four, the chai wallah started laughing and talking to us in Hindi. Ashu explained, “There are many customers that come every day and they are friends and take chai free. Many one is coming here and many crowd and he’ll give you chai and [snaps fingers] “chalo” [meaning “let’s go!”] — not paying the money. But they’re not caring about these things because they’re very much very good fellows.”

Finally, Manoj stirred each glass vigorously, with the rhythm and calm fervor of a classical Indian drummer. The “clink-clanking” of the metal spoon against glass was like a dinner bell to the customers. In the madness of anxious hands grabbing for their glasses of chai, Manoj handed us ours.

It was dark, bold and on the edge of being too bitter. I liked it. Even though the tea was not steeped or boiled like most, it bore a distinctive strong tea flavor that provided quite a wake-up. We attempted to give Manoj four rupees for our chais, but he just shook his head and smiled. 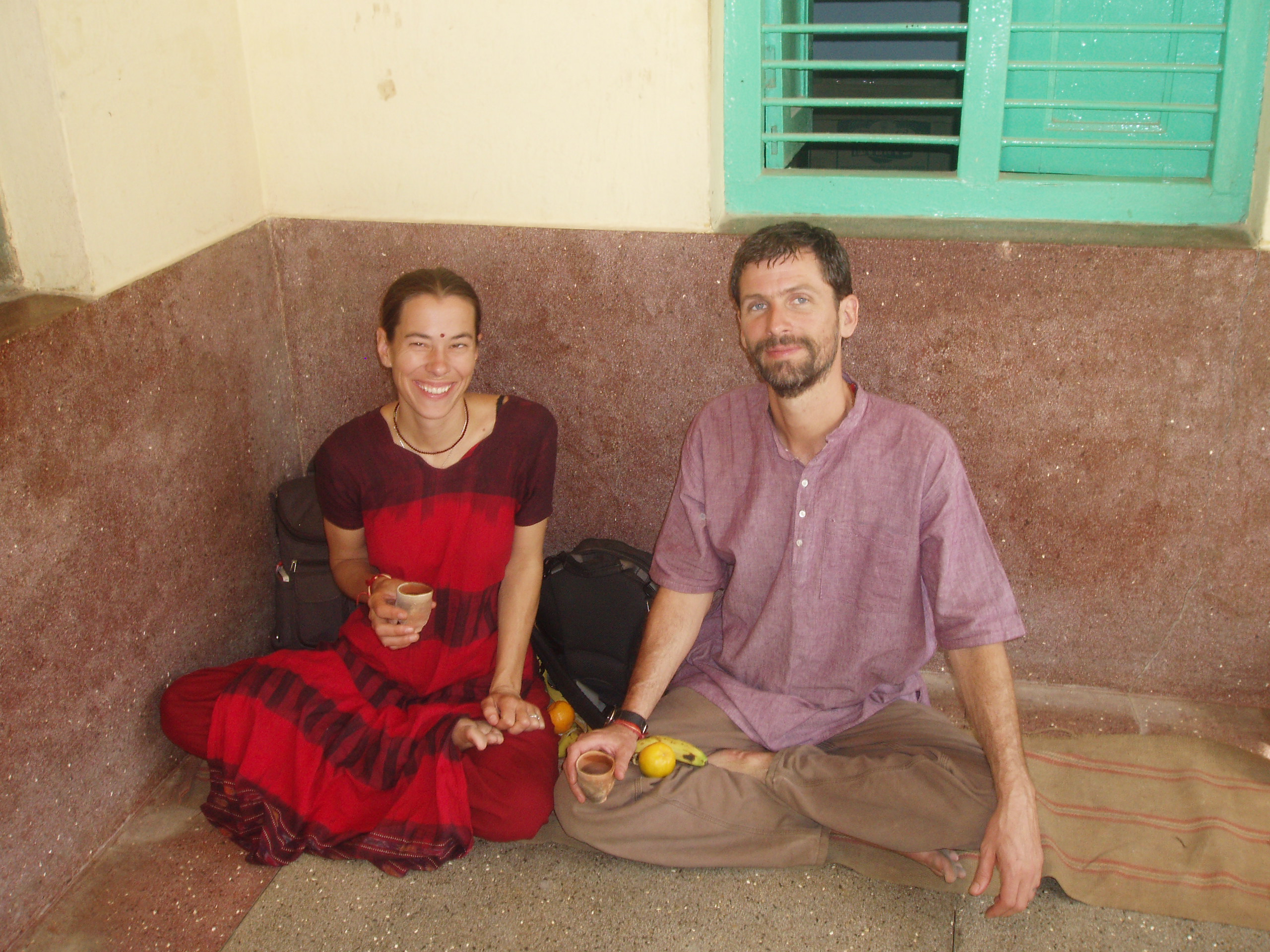