Durga Puja may be the world’s greatest street party. For five days, Kolkata completely shuts down to honor the Mother Goddess Durga and celebrate her victory over the evil buffalo demon Mahishashura.

Throughout the city, thousands of elaborate structures known as pandals are constructed to house larger-than-life idols of Durga slaying Mahishashura, flanked by her children Ganesh, Lakshmi, Saraswati and Karthik. Many artists spend all year coming up with themes for these pandals, which provide audiences with far more than a temporary temple – they transport visitors to other worlds with their captivating designs, from a typical Bengali village to Harry Potter’s Hogwarts.

Crowds fill the streets, hopping from pandal to pandal until the wee hours of the morning. This all-night revelry would of course not be possible without a little caffeine kick, and chai wallahs are happy to help, serving strong-brewed black milk tea, and occasionally lebu cha – black tea served with fresh squeezed lemon, sugar and black salt to give refreshing late-night boost. Many keep their stands open until 5 am. Chai wallahs fortunate enough to be based in communities with popular pandals can expect to sell hundreds, in some cases thousands of additional cups each night.

These entrepreneurs aren’t the only ones seeking to make a buck off the holiday. Indeed, Durga Puja has become increasingly commercialized in recent years. Streets are lined with themed billboards – as you wait in line to enter a pandal, you see Durga gabbing on a cell phone encouraging you to switch carriers or using a new laundry detergent: “Make this a whiter Durga Puja.”

The festive season has become an excuse for shopping, and the norm is to wear new clothes each night of the festival. Of course, the holiday’s recent history is rooted in conspicuous consumption. Pandals originated in the mid-eighteenth century as opportunities for the city’s elite to showcase their wealth with elaborate household pujas. This year, new saris and salwars were soaked as remnant rains from Cyclone Phailin poured down on the city.

But the downpour did not dampen spirits on the festival’s final night, Vijaya Dashami, when people march idols through the streets to be immersed into the Hooghly River, a tributary of the holy Ganges. Children blow noisemakers. Men dance in the streets following floats carrying colorful idols. Women laugh and throw sindhoor into crowds from trucks. As all of Kolkata comes out to send off their idols, the city takes on the feeling of Carnival in Rio or Mardi Gras in New Orleans, if perhaps with less flashing of body parts.

Chai wallahs are there each step of the way. Joga and his wife Mongala typically sell chai, eggs and toast on the main thoroughfare of Bagh Bazaar in North Kolkata. But during the immersion – Bhashaan in Bengali – they move their stand to the riverside next to their home on the banks, just a few yards down from the ghat where the idols are released into the river. “Business is great during bhashaan,” Joga said. “Everyone comes to enjoy and celebrate the immersion of the idols. I get to watch it all from here.”

Joga usually sees great joy this time of year. But this year, the Bagh Bazaar Ghat has been witness to tragedy. As we sipped chai at Joga’s stand, news spread that a man had just drowned while performing the immersion ritual. He had likely been tangled in the ropes used to lower the idol, then pulled down by the forceful current of the Hooghly.

The scene of celebration quickly turned grave. Colorfully dressed women from the victim’s family – packed into the back of a truck where just moments earlier they had been dancing and laughing – broke down and cried to the sky. A boy screamed over and over for his father: “Baba!”

Emotions wavered between grief and anger. Family members yelled at policemen for their failure to prepare for the situation. These sorts of accidents are common, but no emergency boats had been patrolling the waters. A small wooden rowboat was deployed, from which a policeman in a white uniform supervised two volunteer divers, neither wearing goggles or any diving equipment.

After an hour of waiting, a rumor went up in the crowd that the drowned man had been found and he was alive. It seemed a very cruel emotional roller coaster to send his family on. The throng remained packed tight around the steps leading down to the ghat, people pushing one another to scan the murky river for signs of a body.

We left the family to their grief and walked along the train tracks to another ghat just five minutes away. There we found revelry a world away from the tragic scene we had left behind, as men shouted “Bolo Durga Mai Ki!” and carried idols down slippery steps, releasing them into the river.

The next morning, we learned the drowning victim’s body had been found at a ghat down the river. The man, Sukumar Kanshabanik, was 25 years old. 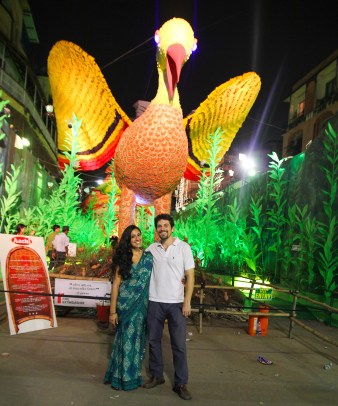 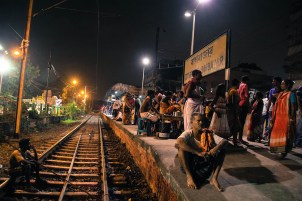 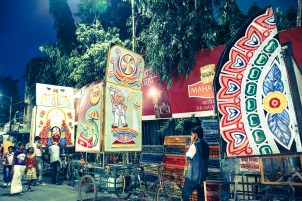