When we arrived in Delhi eight months ago to document chai wallahs across India, we could not have imagined the characters we would meet and the wild detours we would take along the way. After visiting 18 states, hearing hundreds of stories and drinking countless cups of chai, we are heading back to the United States to write a book that brings together our experiences. This blog post about the chai wallah who was our original inspiration for Chai Wallahs of India is the final song of the first act of our project.

Devraj Singh at his chai stand in Kalkaji Extension, Delhi

My last day in Delhi. It was hot, the sky gray and oppressive, dust hovering in the dry air. We were finally going to Kalkalji Extension to see if the chai wallah across from the school where I had taught on my Fulbright fellowship three years ago was still there. Zach and I had already experienced disappearing chai wallahs – we would head back to a stand a few weeks after having a great conversation with someone only to find the spot vacant or occupied by a new vendor – and I was worried that my chai wallah, whose name I couldn’t remember, may have moved on to bigger and better things.

As we walked down the unpaved road leading to the spot, memories rushed back. Here was the chole bhature guy, selling plates of sizzling fried bread and chunky chickpeas for only ten rupees (less than 20 cents). There was the row of chicken sellers, leaning on sagging cages overstuffed with filthy birds. The samosa wallah had converted his formerly modest shack to a proper restaurant offering thalis for 25 rupees a pop. Flies hung thick in the air as we continued up the road toward a dumpster surrounded by putrefying garbage. The familiar smell, which on muggy days had wafted up to the classrooms where I wrangled 30-plus hyper kids, indicated that we were near. And then suddenly there it was – set back from the road, a tin roof supported by wooden sticks shading a small table over which my chai wallah stood stirring a pot.

I approached him hesitantly, smiling but nervous that he would not remember me. He had been one of the major inspirations, along with the chai walli at Zach’s school, for us returning to India to collect stories from chai wallahs around the country. Dozens of times during the past year, when people had asked us how we had come up with the idea and why we wanted to write about chai wallahs, I would talk about this man. His stand was a place of refuge for me when the school environment – often tense under the ruthless reign of Principal Ma’am, whose approach to running a school terrified me and the students – got to be too much. The other American teacher and I would sneak out of the school midday for chai and egg sandwiches, much to the dismay of the Indian teachers, who ate homecooked lunches tightly packed in tiffins and would never have dared to eat such “unhygienic outside food.” But for me, those greasy, spicy sandwiches and thick milky chai were salvation, and the chai wallah was the one delivering it. We didn’t have conversations with each other – my Hindi wasn’t great, and he must have thought us odd to visit his stall so often. His regular customers were all men, mostly laborers from the surrounding industrial area. When the school year ended and I said goodbye to him, handing him a picture of me along with a Hawaii calendar that I had brought from home months before, I teared up. I felt silly knowing that to him, I was probably just another customer, but I wished I had taken the time to find out the story of the man behind the kettle who had come to mean so much to me. That’s why we had come back this time.

We ducked under the black tarp covering the chai stand and I half-smiled at the chai wallah. He met my questioning eyes over the bubbling pot on the stove and grinned in recognition. “Oh, you have come back after so long?” he said simply. “Ji ji ji!” I exclaimed, relieved that he remembered me. “Chai?” he asked. “Haanji. Two,” I said, pulling up the bench for me and Zach to sit on. Zach asked his name. “Aap ka nam kya hai?” The chai wallah looked at me expectantly and realized I didn’t know. “D.R. Singh. Devraj.” He waved over the teenage boy who had been watching our exchange and told him to make us chai and an egg sandwich. 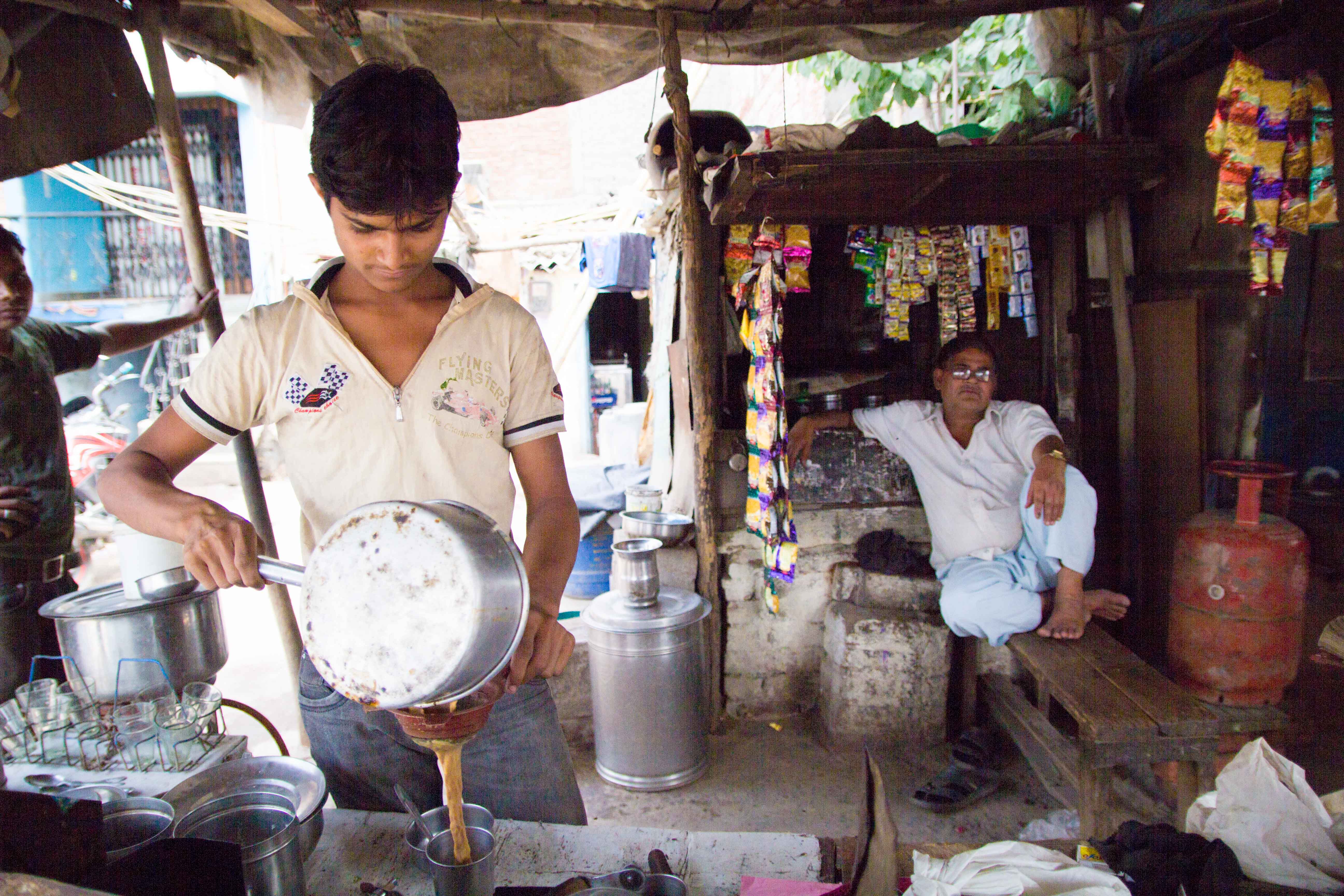 The boy, who we found out was his nephew Satyam, was a new addition to the business. So was the man who had set up shop on a wooden table in the back corner of Devraj’s stand, frying pakoras and rolling out dough for samosas. But otherwise, things were the same. Loaves of white bread leaned against the old mustard oil tin shielding the stove from wind and stacks of oily bread pakoras loomed over packets of Parle G biscuits strewn over the wooden table. The chai was just as delicious as I had remembered – thick, milky, and the perfect sweetness – and the egg sandwich too. 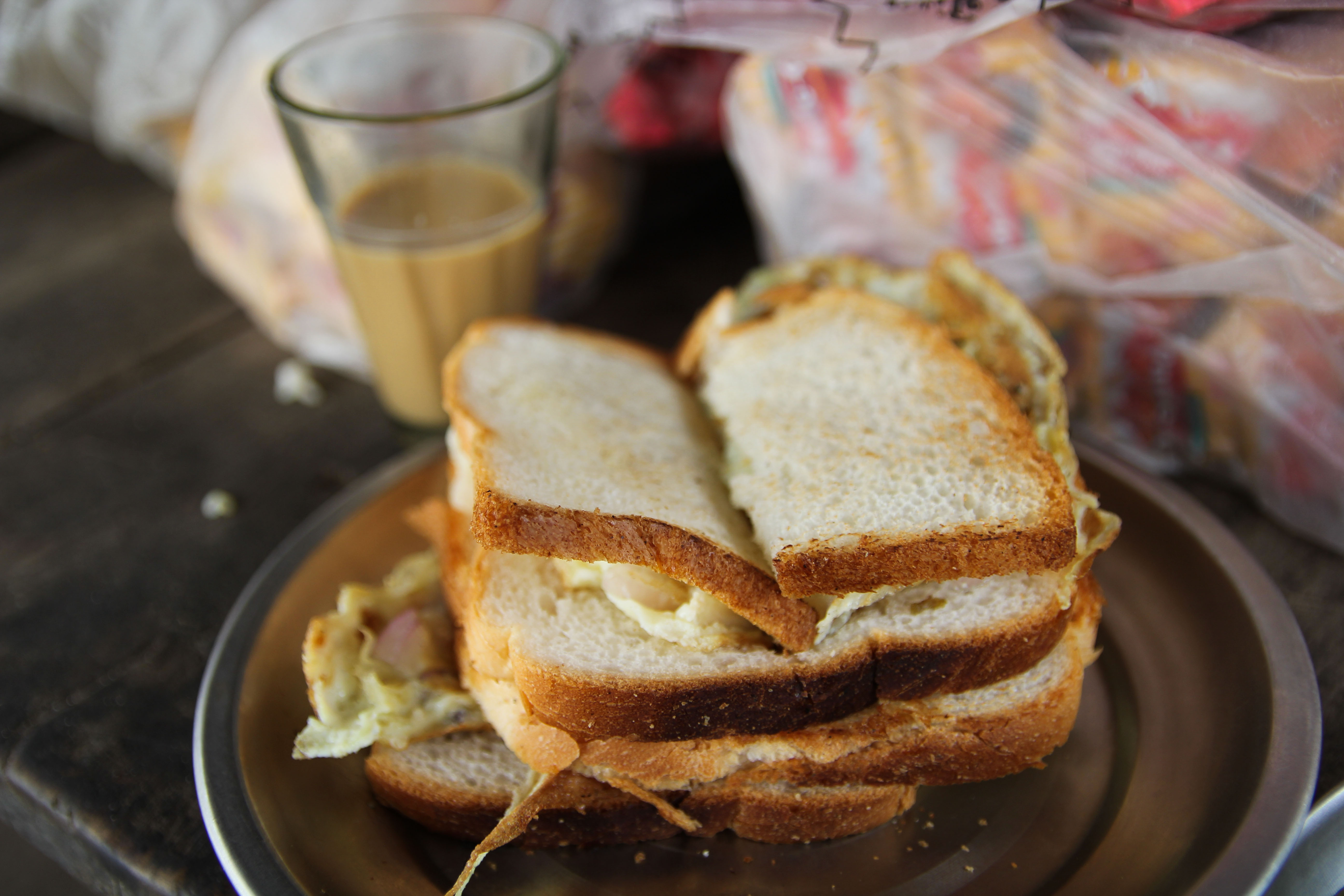 In between sips and bites, we told Devraj about our project documenting chai wallahs around India and how he had been part of it from the start. He told us about his life, filling in the gaps I had always wondered about. His was a story of migration and hard work, like so many others we had heard. Born in a village near Allahabad, Uttar Pradesh, Devraj came to Delhi 40 years ago, leaving his family behind to find work in the capital. His first job was as a painter. “White wash,” he said. Once he had saved enough money, he opened the tea stall right outside his home. We could see the house from where we sat – a two-room cement box painted lavender, the roof made of corrugated tin and tarp. Inside, his wife chopped vegetables for the midday meal Devraj sold to the construction workers across the street, who were busy clearing land for a new housing project by the Delhi Development Authority.

I asked him about his children, recalling that he had a daughter attending the school where I had taught. “My daughter is married! She lives in Faizabad,” he said. “But I thought she was in third grade when I was here, “ I responded, confused. “No, that is my son. My daughter is older. 26 years. Her name is Resham,” Devraj smiled.

I stared at him in disbelief. How had I never known that his daughter shared my name, my age? In all our travels, Zach and I had met plenty of Reshmas and Reshmis, but no other Reshams. Yet there had been another Resham on our journey all along. It was a twist to the story we had shared so many times to explain the motivation behind Chai Wallahs of India, and it made clear that the question we had set out with – who are the people behind the cups? – was one worth answering.

We drained the last drops from our glasses, the taste transporting me back three years to when chai was just a drink and Devraj had been simply a smiling face behind his kettle. It was the perfect cup of chai to have as my last before leaving for the United States the next morning, and finally knowing the story behind the chai wallah who had started it all made it even sweeter. 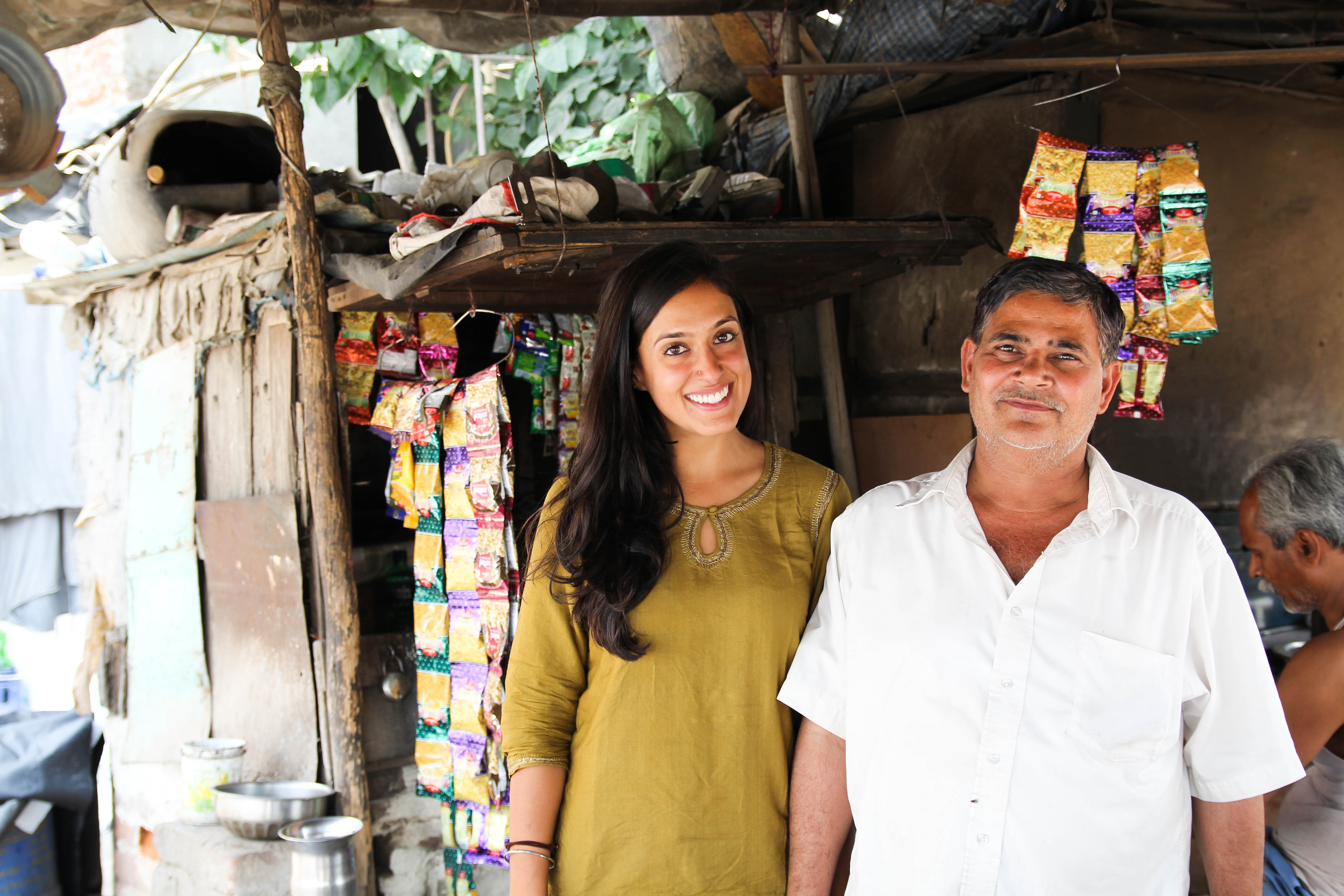 When I learned in high school psychology class that smell is the most primitive of our five senses – that the nerves are located in the very back of the brain, far removed from the frontal lobe where all our logical decision making takes place – everything made sense. Since I was a child, I’ve always had strong reactions to smells. They’ve transported me to times or places that I had forgotten, taking me out of my current state and temporarily transforming me to a younger version of myself. Stepping off the plane from Delhi today and inhaling the air – somehow humid and full of the smell of burning trash, even though we were still in the enclosed, modern, sterile airport – was one of those moments. My eyes were bleary from 17 hours of travel, my ears were still ringing with the white noise of the airplane’s engine, my mouth was dry from lack of water, and my body felt cramped from being curled into a hard seat for too long, but my nose told me that everything was right, that I was back home. END_OF_DOCUMENT_TOKEN_TO_BE_REPLACED